ACW is a vocal harmony chorus based in Perth, Western Australia; a 90+ voice chorus under the co-direction of Lindsey Dyer and Jo Oosterhoff.  ACW was founded in 2008 as a brand-new chorus with practically no experience in barbershop singing.  Within 2 years, they participated in their first National competition (2010), coming 4th place overall.  They achieved 6th place in Canberra in 2012 in a tough contest, and were excited to be placed 2nd and achieve the Most Improved Chorus award in Perth in 2013. Also 2015 National Champions. 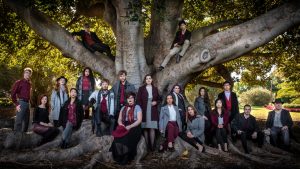 The award-winning Baden Street Singers are a dynamic vocal group with a passion for all things a cappella – from barbershop, to ballads, to beatboxing. Despite their relative youth, they’ve built a reputation on their strong vocal talent, undeniably charming stage presence, and bold artistic vision. But it’s their ensemble chemistry that makes them unique; they embrace diversity in their membership and in their repertoire. They can be found headlining choral concerts, festivals, competitions and community outreach programs around Perth – all under the inspiring musical leadership of founder and director Lionel Pierson. Don’t miss your opportunity to see these polished performers; they’re the hottest a cappella group in town! 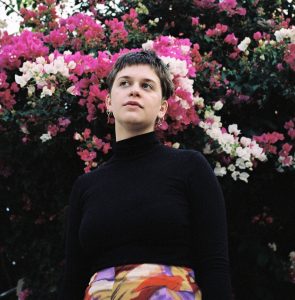 Nika Mo is the folk project of Perth composer Annika Moses, and for the Dunsborough Song Festival 2018 she brings a set of intricate a cappella arrangements of folk originals. Performing entirely solo, Annika uses a loop pedal to create weaving vocal harmonies, laying a bed for her honest lyrics that find poeticism in the Perth mundane. Her appearance at Fairbridge Festival earlier this year left the crowd ‘silent for the most part, totally enthralled by her storytelling abilities and sweet voice,’ (X-Press Magazine). Also a member of the a vocal group Darling, and the choir Eneksis, Annika’s unique voice is showcased in this one-off a cappella reimagining of her emotional folk originals. 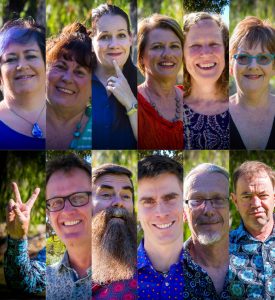 Festival favourite Summerhouse is back with its trademark mix of mellow and rocking arrangements of original and adopted songs.

There may be rhythm.

There will be no flying in on a wire. 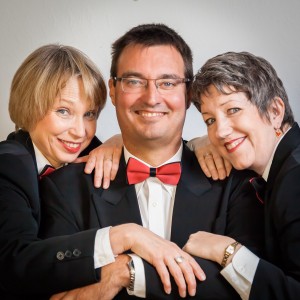 This stylish musical package conceals subversive wit and wordcraft on intelligent design, Tupperware obsession, the aphrodisiac power of the common vacuum cleaner and ridding your home of excess adult offspring. These original a cappella comedians storm the intellectual barricades of right-minded folk. Anticipate the unexpected, plus classic musical mischief from Python to Lehrer and Flanders to Swann. 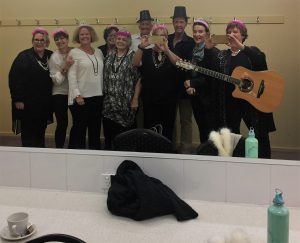 The Beverley Station Singers all sing by ear. We use no music and all of the arrangements are done “in the moment “ by their musical director Kelly Newton-Wordsworth. This makes for very dynamic rehearsals and an original sound in performances. They sing an eklectic collection of songs which tend to be popular with audiences as they are usually well known to many. They have a lot of fun wherever they go and hope to bring happiness and lots of laughs to their audiences! 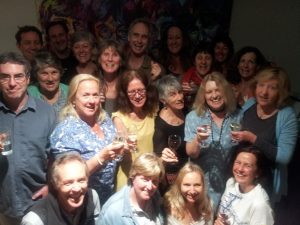 Cleanskins are from Dunsborough, Busselton and surrounding areas. They began singing (and sharing a red or two) about 15 years ago and continue to enjoy meeting on a Friday night to sing & have fun together. They mostly sing A Cappella but you might hear the occasional ukulele or guitar. Listen out for their famous “Cow Medley”! Yeehaw… 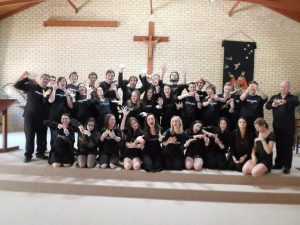 Eneksis Vocal Ensemble from the West Australian Academy of Performing Arts (WAAPA) are a huge favourite at SongFest. The ensemble has gained a reputation as one of the finest choirs in Australia, under the direction of Micheál McCarthy. 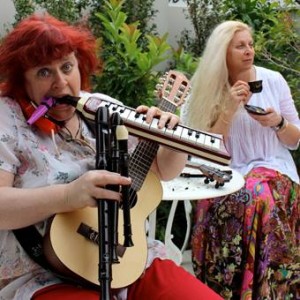 Mel n Nik Jones are Jones of A.R.K. Music, Musings, Mayhem and Miscellany….now bigger and bolder if that is indeed metaphysically possible, with full ensemble.  They’ll have you in the aisles. 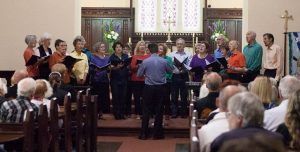 Our Glyde-In Community choir meets in East Fremantle every Tuesday afternoon under the direction of Digby Hill. Digby likes to challenge us with an eclectic range of songs with many ‘crunchy harmonies’. Everyone is welcome and we all feel our spirits lift as we sing together.
In May we participated in the inaugural Merredin Songfest and we look forward to performing at Dunsborough Songfest under the direction of Mike Murray. 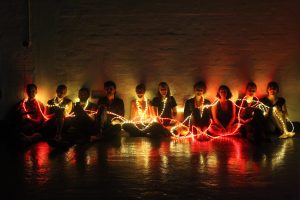 Koondarm grew from an event started at Perth City Farm called “Tunesday” – a Tuesday night gathering where musicians and linguists gathered to share original music, Nyoongar language and Aboriginal song. Following this event, with support and encouragement from Madjiltil Moorna, we decided to trial a 6 week youth choir in which we met many new friends and received much support. 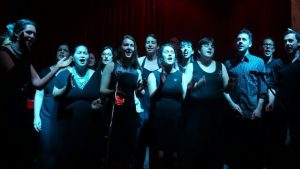 In simple terms, No Rechoirments was started by a group of people who wanted to get together and sing. Founded about five years ago, we’re a non-auditioned choir with a repertoire ranging from Tallis to Paul Kelly. We’ll have a go at singing anything. They boast a lofty claim of having no requirements but this is in fact, a fallacy, for there are several requirements. For example: cake and tea is a must before rehearsal. Anyone is welcome. You must have fun.  We hope that we get you to sing, whomever you may be, without requirement. 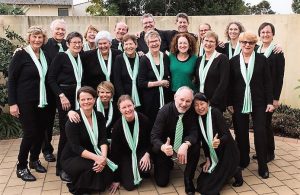 Peppermint sings an eclectic range of songs in 4 to 8-part harmony.  We sing mostly a Capella, and sometimes call on the diverse musical skills of our choir members to bring extra sparkle to our songs with instruments and percussion.  We love to sing together and share our minty-fresh musical joy with audiences under the guidance of our talented musical director Coralie Kan.

Rossmoyne Community Singers Rossmoyne Community Singers will next year celebrate their 20th anniversary and are today a ladies choir who sing in 3 and 4 part harmony. They started out as a mixed choir but by attrition became ladies only!! The only blokes allowed at their rehearsal each week are their Musical Director – the fabulous Harry Oliff and super talented accompanist Jackson Griggs!! So, unlike most choirs, they’re not looking for blokes to join them but would happily welcome any ladies who would like to come along and sing.

Shelley, Perth, We are a sassy group of ladies who love to sing and have fun doing it!
Originally formed some 15 plus years ago from within the bosom of The Rossmoyne Community Singers Inc., Strike a Chord has blossomed and flourished under the new direction of our highly accomplished musical director and accompanist Harry Oliff. 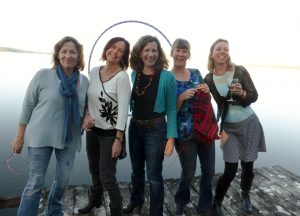 SSB Come and sample some exquisite “vintage local produce”. The ever flexible SSB, this year in quartet form, have been interweaving their close harmonies for over a decade. They love to cover a huge variety of musical genres and artists, and are guaranteed to mesmerise with some new surprises and some old favourites. 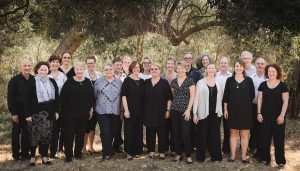 TRS is an a capella choir who sing in four to eight part harmony. Their repertoire is varied and includes current pop music, jazz standards, gospel, doo wop and Motown. Under musical director extraordinaire Coralie Kan, TRS have established themselves as a musically strong choir who love to entertain and have fun!

Voices of the Vasse Chorus 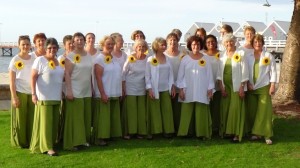 are a group of women with a passion for singing a cappella 4 part harmony, barbershop style!  Voices of the Vasse have never missed a SongFest and are a wonderful part of the history of this festival.  This year they will perform in the BIG Saturday night concert at the OLC.  Dont miss it! 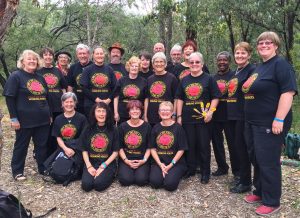 Working Voices is a not-for-profit community choir of about 35 members.  Raelene Bruisma PhD is the musical director. The repertoire of the choir is carefully chosen to reflect the choir’s commitment to social justice and working life issues. Their passionate singing style reflects their belief in the issues they sing about.

Groups of all abilities are encouraged to apply